A selection of items from the collection of the MWAHS and private owners. 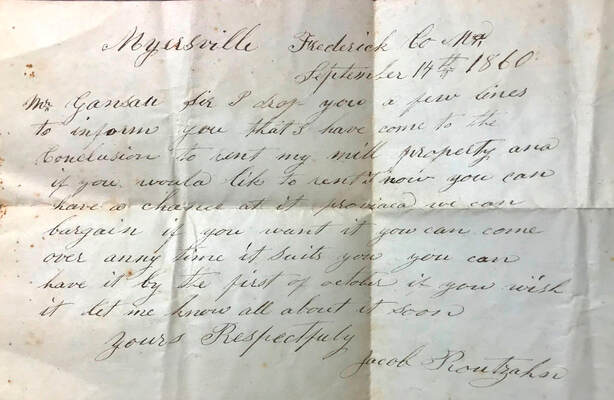 Letter from John Jacob Routzahn (1792-1876) to Mr. Gansale, September 1860. "Mr. Gansale, Sir I drop you a few lines to inform you that I have come to the conclusion to rent my mill property and if you would like to rent it now you can have a chance at it provided we can bargain. If you want to come over anny time it suits you you can have it by the first of October if you wish it. Let me know all about it soon. Yours Respectfully, Jacob Routzahn." MWAHS Collection. 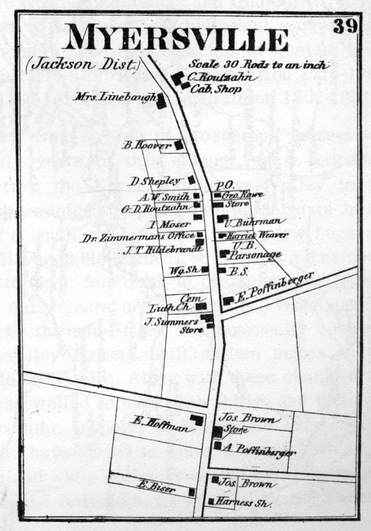 Structures and Homes Comprising Myersville, 1873. This plat is from Titus Atlas of Frederick County. On it can be seen the 1796 tavern ("A. Poffinberger") with the Joseph Brown store beside it; the home of businessman and Maryland State Representative Upton Burhman; the carriage shop of John T. Hildebrandt ("Wg. Sh.") that would soon catch fire and also burn St. Paul's Lutheran Church next door; the United Brethren Church parsonage ("U.B. Parsonage"), the home of the widowed Catharine Shank Linebaugh ("Mrs. Linebaugh") whose husband, wagonmaker and wheelwright Jonathan Linebaugh, died in 1864; and others. 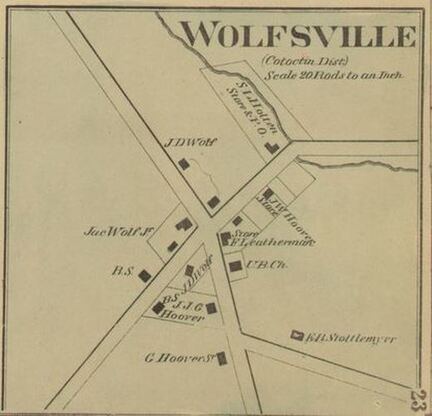 Wolfsville in 1873. This plat is from the Titus Atlas of Frederick County.
Directory of Maryland by Post Office Addresses, 1874. 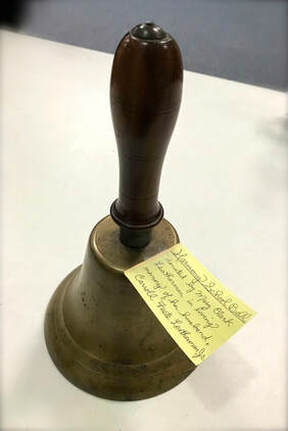 Schoolmaster's bell from the Old Harmony School. This bell was donated to the historical society by Mary Clark Leatherman in loving memory of her husband, Carroll Feete Leatherman, Jr. Students would have heard it rung each day to mark the beginning of classes. MWAHS Collection.
Farm Appliances. An 1888 copy of the book owned by Myersville-area farmer Elmer Alonzo Young (1863-1940) (right). He was a poultry and pigeon farmer, magazine correspondent, and founding member of Myersville Savings Bank. Ann Longmore-Etheridge Collection. 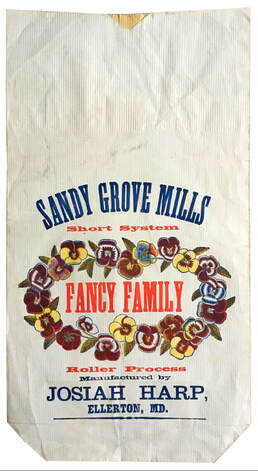 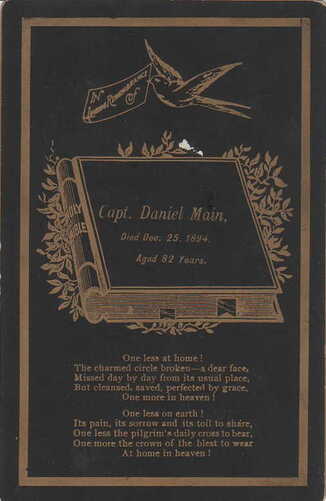 "A Picturesque Funeral. A Hearse and Mounted Pallbearers in Snowdrifts of the Mountains. The funeral of Capt. Daniel Main took place today…. The body was conveyed in a hearse drawn by four black horses to Middletown, Frederick County, a distance of eighteen miles, leaving Hagerstown at daylight. Seventeen of the relatives rode in a sleigh drawn by for white horses. The snow was so deep that but little progress was made. When Boonsboro was reached, a relay of the horses was secured. In crossing South Mountain, huge drifts of snow were encountered. Middletown was reached late in the afternoon. Services were held in the Lutheran church and the body interred by the side his wife." 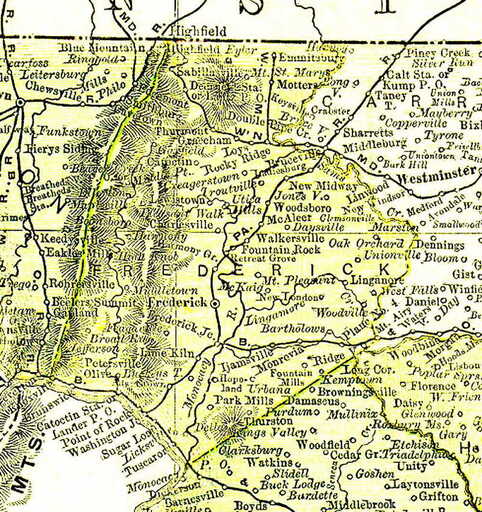 Frederick County Map, 1895. This map didn't note Myersville or Wolfsville, the main towns of the area, but Harmony, Pleasant Walk, and Ellerton were all included. 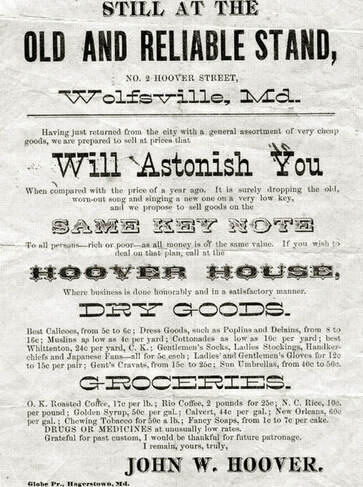 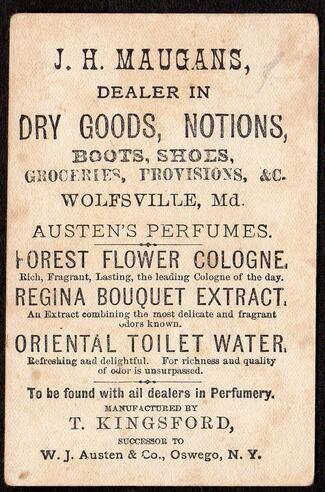 Advertising card for John Henry Maugans' (1840-1906) mercantile in Wolfsville, Circa 1895-1900. "Lieut. John H. Maugans, ex-merchant of Wolfsville, and of industrious habits, enlisted in Company K, 9th Indiana Infantry, as a private in the civil war, and fought in many hard battles in which his regiment engaged, was highly applauded by the late Gen. Nelson for its fighting qualities, justly merits the honor conferred upon him Gov. Morton of Indiana under whose administration he was commissioned. Mr. Maugans has quite a host of relatives and friends in this community. The late Cyrus Moser of Co. D, 6th Md., Infantry, a valiant soldier, was his uncle, being a brother to his mother."--Catoctin Clarion, 26 March, 1903. Image courtesy Base Kuhn. 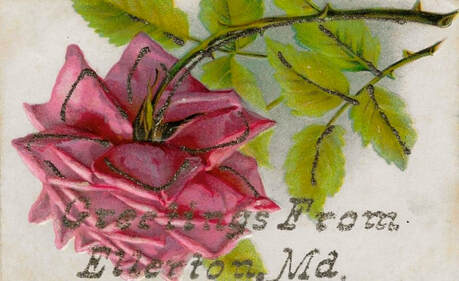 Postcard Addressed to Nellie Johnson of Church Hill, Circa 1910. 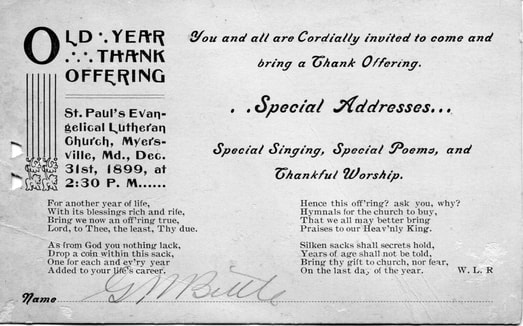 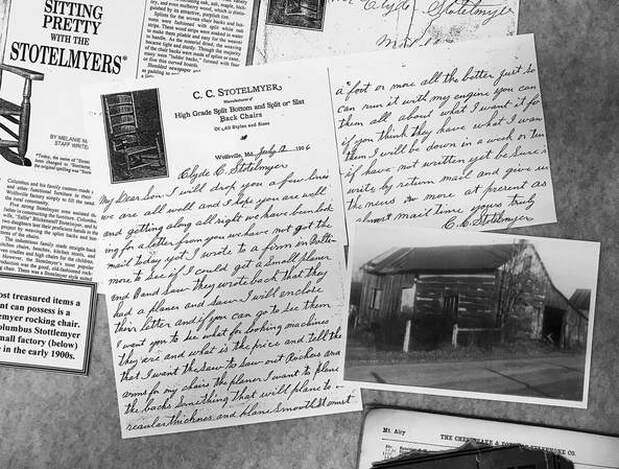 Letter from C. C. Stottlemyer, 12 July, 1906. Stottlemyer and his family made the renown and sought-after Stottlemyer chairs in the small Wolfsville workshop at bottom right.

"My Dear Son, I will drop you a few lines. We are all well and I hope you are well and getting along all right. We have been looking for a letter from you. We have not got the mail today yet.

"I wrote to a firm in Baltimore to see if I could get a  small planer and band saw. They wrote back that they had a planer and saw. I will enclose their letter and if you can go see them I want you to see what for looking machines they are and what is the price and tell them that I want the saw to saw out rockers and arms for my chairs. The planer I want to plane the backs -- something that will plane to a regular thickness and plane Smooth.

​"It must ... a foot or more all the better. Just so I can run it with my engine. You can tell then all about what I want it for. If you think they have what I want it for then I will be down in a week or two.

"If have not written yet be sure to write by return mail and give us the news. No more at present as almost mail time. Yours truly, 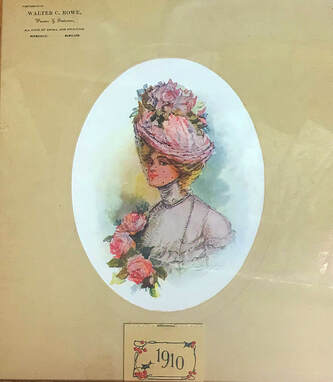 Promotional Calendar Distributed by Walter C. Rowe, Printer and Stationer, 1910. Rowe would later become a railway lineman and run other side businesses. Owned by Dick Phelps. 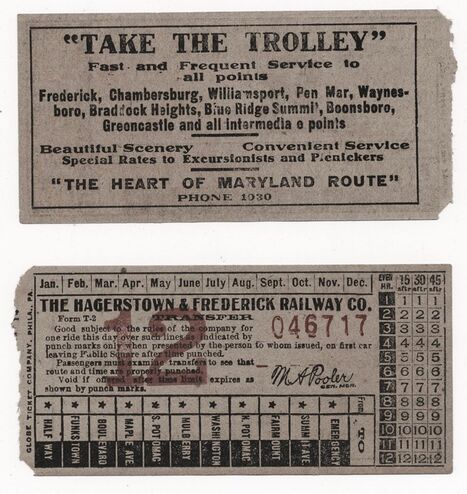 Transfer for the Hagerstown & Frederick Trolley, Circa 1910. Trolley expert Rueben Moss notes, "Passengers would pay the full-trip fare when boarding the first trolley and be presented with this if they were transferring to another trolley in Hagerstown. The month, hour, and destination would be punched when issued to indicate to the driver of the next trolley what fare had already been paid. The large number (12 in this case) was the day of the month so that it could not be used again. Sometimes other destinations not on the transfer could be stamped by a station agent, as is the case with a used transfer in the H&F Historical Society Collection stamped for Shady Grove, Pennsylvania." MWAHS Collection.
CTS Tomolene Salve Tin, Circa 1910. This medicinal salve was produced by Eureka Specialty Company of Middletown. This tin is completely full of the original product, which the reverse promotes as a valuable remedy for chapped skin, burns, sores, cuts, boils, poison ivy, and other ailments. Owned by Ann Longmore-Etheridge. 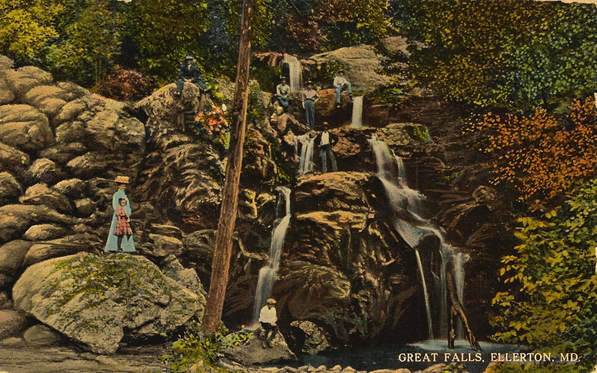 Highland Falls, Ellerton, Postcard, Image Circa 1910. This waterfall near Ellerton is also known as Great Falls. Although the image is from a decade earlier, this postcard was postmarked 24 December, 1922. It is addressed to Mr. S. Schmall, 4549 Calumet St., Chicago, IL. The delightful message reads, "Thank you dear for the nice letter you send [sic]​ us and all the kisses. Hope you are a good boy. Did you throw Herbert out of bed Sunday morning? Love to you & all. Aunt Alice." Owned by Ann Longmore-Etheridge.

Another version of the image shows the same group posing on the rocks in greater, uncolored detail. Courtesy Steve Murphy. 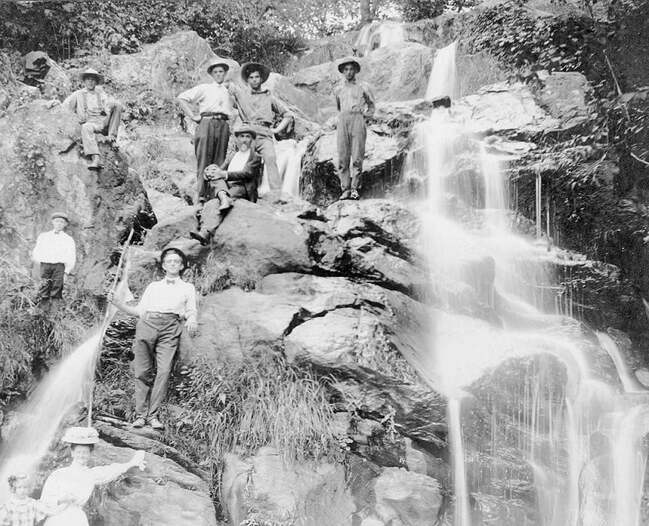 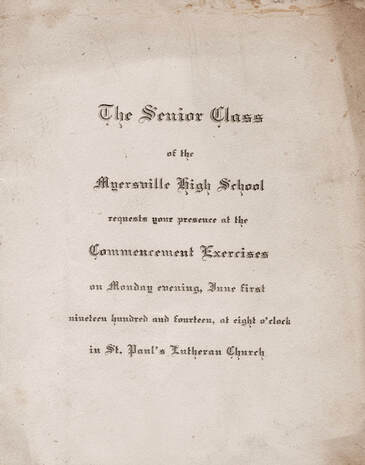 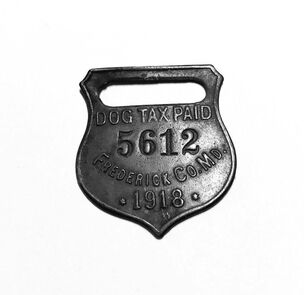 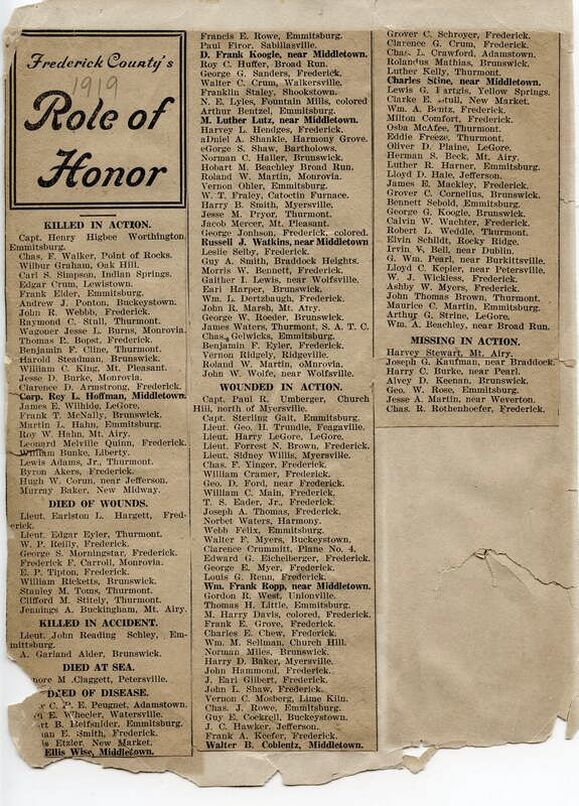 Frederick County 1919 Role of Honor. This lists all the area's soldier losses and injuries during World War I. MWAHS Collection.
Postcard to C. A. Ruppersberger, Jr., Postmarked 6 January, 1923. The reverse reads: "Dear Sweet Heart, do what this verse says as soon as possible. Grand Mother." 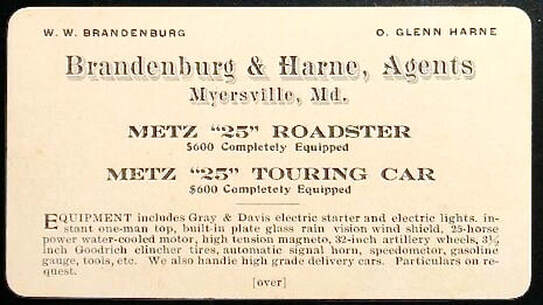 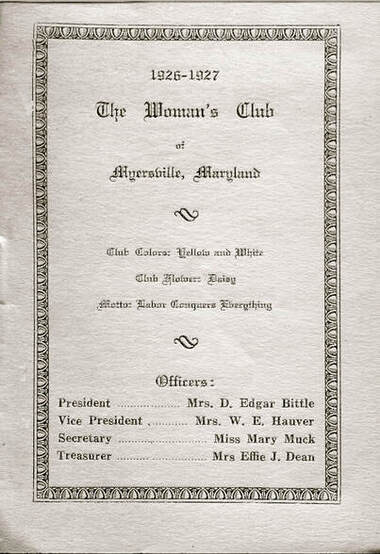 Yearbook for the Woman's Club of Myersville, 1926-1927. "Club Colors: Yellow and White; Club Flower: Daisy; Motto: Labor Conquers Everything. Officers: President -- Mrs. D. Edgar Bittle; Vice President -- Mrs. W. E. Hauver; Secretary -- Miss Mary Muck; Treasurer -- Miss Effie J. Dean." Courtesy Middletown Valley Historical Society.
Left: Merchandise tag, bef. 1931. MWAHS Collection. Christopher Columbus Stottlemyer (1857-1931) was a furniture maker in Wolfsville whose handcrafted rocking chairs are eagerly sought after by collectors. Right: Known as "C.C.," Stottlemyer was descended from "David Stadelmayer, a German immigrant who settled in the Middletown Valley in the late 18th century and raised 10 children, [who] operated a sawmill along Spruce Run near Wolfsville," notes the Frederick Post. "His son, David Jr., operated an up and down sawmill on the property, the remnants of which can be seen today. David Jr.’s grandson, Fred, began making furniture at the Spruce Run homestead, probably in the 1850s. In 1857, his son, Christopher Columbus, known as Columbus or CC, was born. Columbus added the distinctive acorn finials the chairs were known for, and made his chairs at a shop along what today is Black Rock Road." MWAHS Collection. 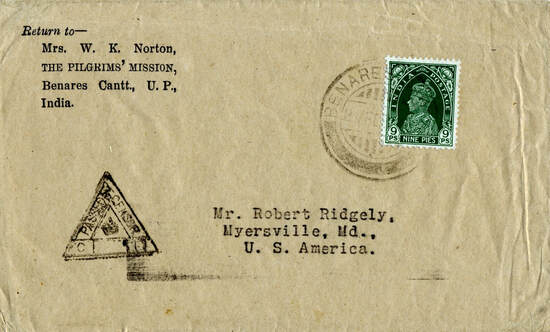 Envelope for a letter addressed to Robert Ridgely, circa 1938. Ridgely was a prohibitionist and churchman who worked with the FBI to find illegal stills. This correspondence originated from a church mission in India. Owned by Judy Zeck. 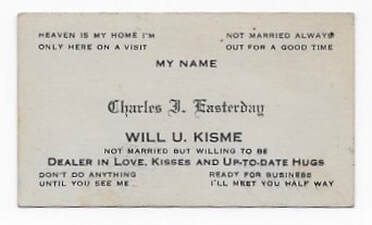 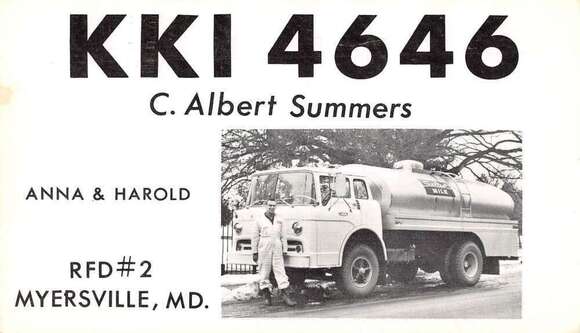 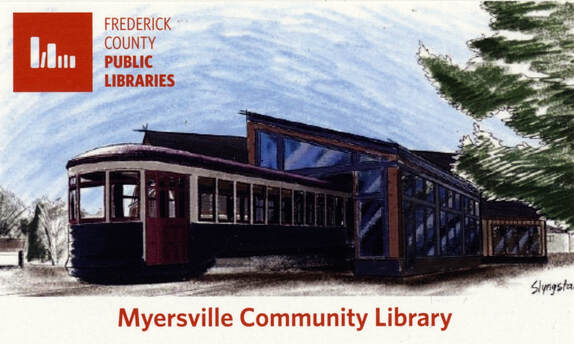 Top: Donor Thank You Card from the Myersville Community Library. Bottom: Medal in Commemoration of the Preservation of Trolley 150 Within the Myersville Library, August 2019. MWAHS Collection.

PDF and Other Files

Download File
The Story of Wolfsville: The Germans in the Middletown Valley by Opal S. Wolfe, 1965. PDF file.

Download File
Article from Cracker Barrel Magazine on the Theophilus Pryor family and crosstie-cutting for the trolley system. PDF file.